Lamphun District “The City of Arts and Culture”

Lamphun or Hariphunchai – The City of Arts and Culture, about 30 km. south of Chiang Mai to the provincial capital of Lamphun is a quiet ancient town with a long history. From the 8th through the 13th centuries it was the capital of a principality called Haripunchai which was originally rulled by the Mon Princess Chamadevi, subject of many legends.

Lamphun today is a quiet town but boasts several interesting sights and makes for an excellent day trip from Chiang Mai. The town is laid out in an oval and is bordered by tranquil moats and the river Kuang.

Unusually for these modem times, one of the great pleasures of a visit to Lamphun is the actual journey from Chiang Mai. The traveler should head south along the old road Highway 106, avoiding the busy superhighway. This road, which once ran directly between Chiang Mai Gate and Lamphun’s northern “elephant crush” Gate, is steeped in history. From the Chiang Mai suburb of Nong Hoi south, for a distance of 12 km. as far as the Chiang Mai Lamphun provincial boundary the road is lined by lofty 30-metre high yang trees, interspersed with fruit orchids, small farms and a few paddy fields. For one day or for a few hours, Lamphun is a wonderful city, full of history and style. 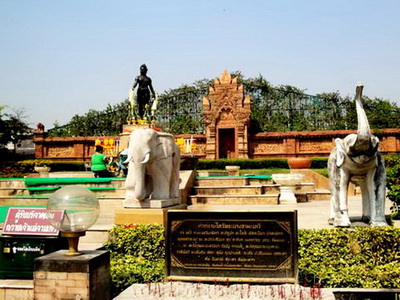 Phra Nang Chamthewi Statue is located in the Nong Dok public park in town commemorating the first ruler of Hariphunchai. According to the Chamthewi chronicles, Hariphunchai was founded by a hermit named Wasuthep around the area between Kuang and Ping River. The hermit invited Princess Chamthewi, the daughter of King Chakaratti of the Kingdom of Lawo, to become the ruler of Hariphunchai. 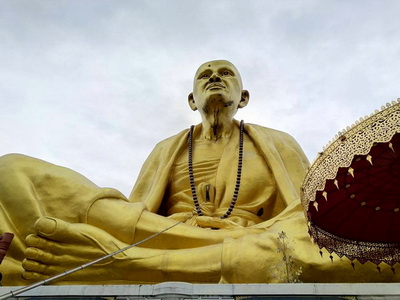 Visiting Kruba Sri Wichai monument Lamphun may give you an inspiration to learn more about him. And that you will see what became in the past. Kruba Sri Wichai monument Lamphun is on the opposite side of Suthewa Anchorite Monument. It won’t be difficult to notice. You will see a golden statue of his in a large size being surrounded with white concret fence. That’s worthy of paying respect to for once in lifetime. 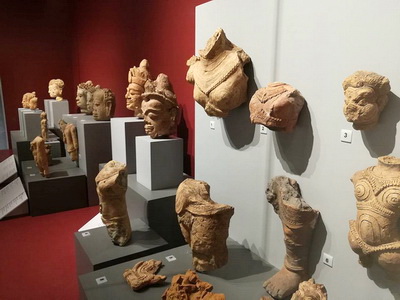 Hariphunchai National Museum, Displays and exhibits include historical development and archaeological items found in Lamphun. These include prehistorical human skeletons and objects of arts from the Dvaravati, Hariphunchai, Lanna and Rattanakosin periods. A chamber in devoted to a collection of inscription stones in Mon and Lanna scripts. 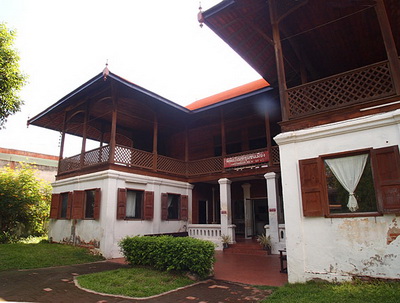 Lamphun Community museum is in Muang County, very easy to go to. The building is decorated in glamorous Thai contemporary style. There are trees and garden around, making the atmosphere so relaxing. Inside the museum, there are bunches of exhibitions, all of which present the history of Lamphun. You will see how people in the past lived their lives. 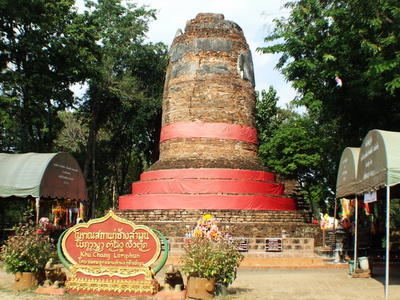 Ku Chang Ku Ma is in fact the cemetery of Camadevi’s elephant and her son’s horse. Ku Chang and Ku Ma are located within the same area. Ku Chang is at the front side, and Ku Ma is behind it. 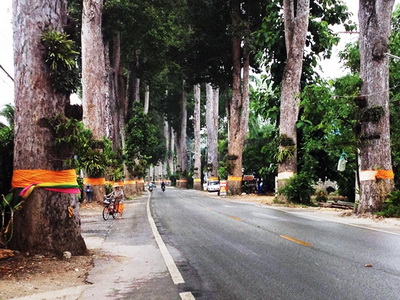 The Rubber Tree Road is full of rubber trees on the sides, which is the uniqueness of Chiang Mai – Lamphun route. There are more than 2,000 rubber trees,  about 12 kilometers along the route.

More About The Rubber Tree Road

Sited in mid-town, Wat Phra That Hariphunchai was built during the reign of King Arthitayarat, a descendant of Queen Chamthewi some 800 years ago. A principal landmark is the 46-metre tall golden Chedi whose present appearance was the result of the restoration work in 1443 by a king of Chiang Mai. It has long been regarded as a major place of worship. Other architectural works include the ancient-style brick arch adorned with fine designs and the pair of sculptured lions at the door. There are also a square-shaped Chedi and a Khmer-style Buddha statue.

More About Phra That Hariphunchai Temple 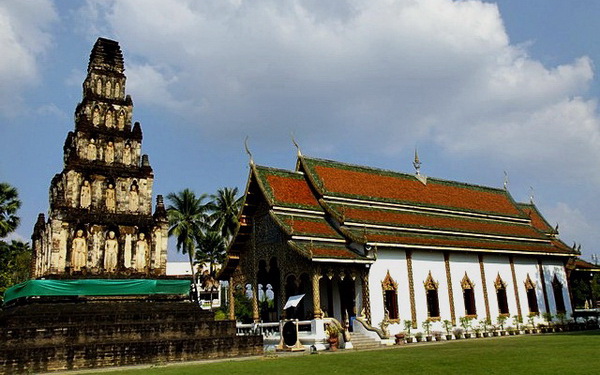 Wat Jamdevi, commonly referred to a “Ku Kut”, is located on the Lamphun-San Pa Tong Road and built in 1298 B.E. in the Lawo (Lopburi) style. The Chedi is a square structure similar to Buddhagaya in India. Around the Chedi are levels of arches holding a total of 60 Buddha statues.

Another ancient site related to the old history of the town is Wat Phra Yuen. The Ku Chang-Ku Ma Chedi at the temple is surrounded on four directions by standing statues. The Chedi itself is cylinder-shaped and commemorates Queen Chamthewi’s war elephant and her son’s steed. 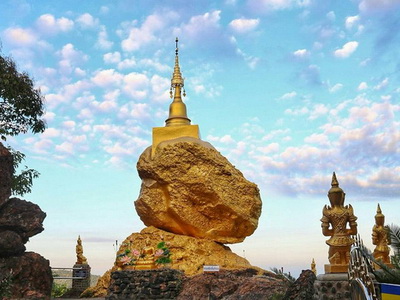 More About Phra That In Kwaen 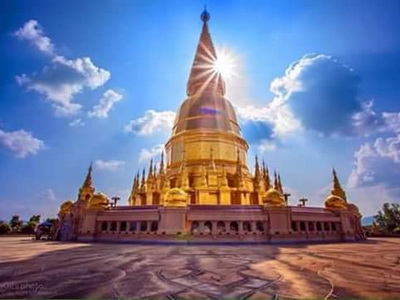 Mahathat Chedi Sri Wiangchai is a temple of Lanna style, very gorgeous. Its pagoda, covered in golden color and made of laterite, is the largest one in Thailand, with 1600-metre-sized base. 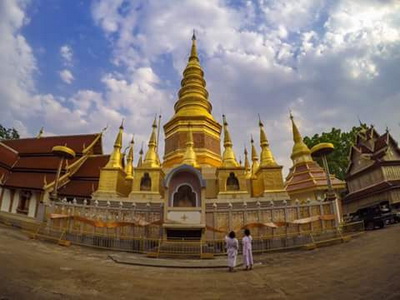 Wat Phra Bat Huai Tom is under the care of ‘Huai Tom Royal Project Development Centre’. Of course, it’s located in the same area. Vising there will get you relaxed mind and knowledge of local lifestyle too. 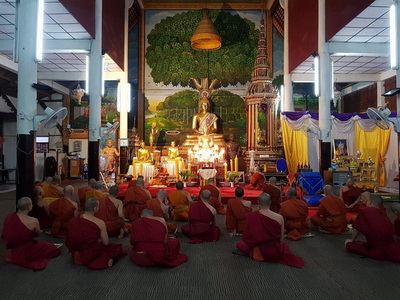 Phra Buddha Bat Tak Pha is an important tourist attraction and a center of Buddhism education. Therefore, beside of just visting the temple, people who want to practice Dhamma are always welcomed. 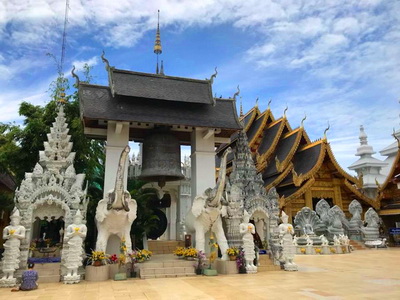 Wat San Pa Yang Luang is one of the ‘5 most beautiful temples in Thailand’. The most outstanding appearance of the temple is its carvings. There are beautiful carvings all over the place. They’re everywhere: walls, poles, roof, stairways etc. Most of them are covered in black and white tone. Get your camera ready and don’t forget to take lots of photos. 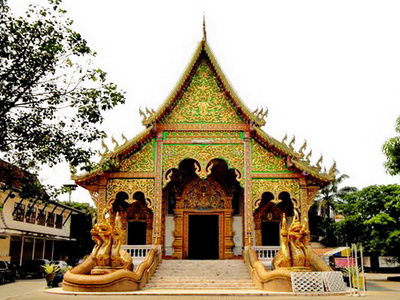 On the road parallel to the old city wall to the west of town is Wat Mahawan, an old temple built since the times of Queen Chamthewi. Enshrined here is a Nak Prok statue (statue with mythical serphants overhead) which was brought to the temple by the Queen. Commonly known as Phra Rot Lamphun, it serves as the model for the famous votive tablet. 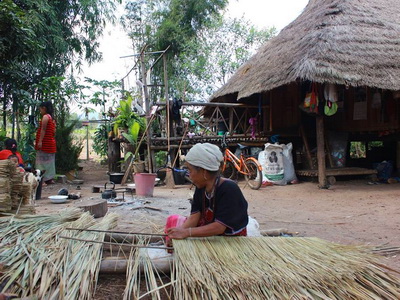 Ban Huai Tom Karen Village is a learning tourist attraction. There are many zones there, exhibition zones and souvenir zones. You may read some texts, look at photos, or admire exhibitions that present you the history of weaved-fabric. 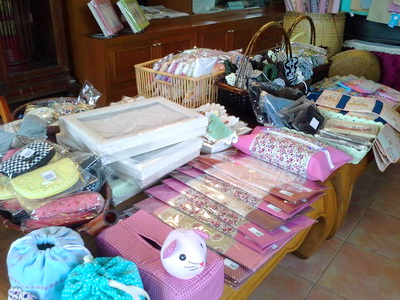 Haripunchai Hand-Weaved Fabric Institute, decorated in Thai contemporary style, is under the care of Lamphun Provincial Organisation. It was built to be a way or preserving hand-weaved fabric, which is a valuable handicraft in Lamphun.

Pa Sang district is a handicraft centre and famous for its handmade cotton materials which are produced mainly in Ban Nong Nguak. Also at this village is an ancient temple noted for its beautiful arches in indigenous Burmese-influenced style. Pasang community is another highlight of Lamphun, twelve kilometers from the city this village is renowned for its cotton weaving and lovely ladies.

The Khun Than mountain range of the Doi Khun Than National Park forms a natural boundary between Lamphun and Lampang provinces. The northern rail line to Chiang Mai runs through the longest rail tunnel in the country, which is 1,352 metres long and takes five minutes to traverse. The moutain has both virgin jungle and pinery. The admission is 100 baht for adults and 50 baht for children.

Covering an area of over 1,000 square kilometres is the Mae Ping National Park. Its main feature is the Ping River, which flows through the forests in the park. On both sides are fertile forest-lands with sheer cliffs providing beautiful natural scenery. Certain parts of the waterway spread out to form reservoir-like bodies of water with numerous small islands and rapids.

Ban Nong Chang Khuen is the most famous longan growing area in the country. The orchards are located some 8 kilometres before Lamphun and with a further 7 kilometres after a right turn. On both sides of the road are numerous longan orchards. The fruits are in season during July-August. Longans were introduced to the area during the reign of King Rama V and have since spread into neighbouring provinces. There are several species today which are popular among consumers. 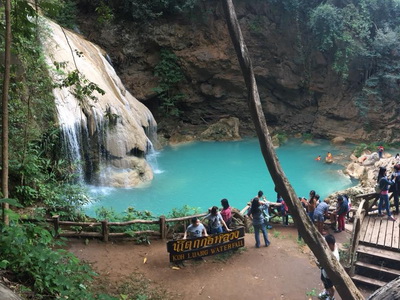 Koh Luang Waterfall shares the same area as Mae Ping National Park. It’s quite large, about 20 metres high. It consists of 7 levels. It looks so beautiful. The water flows from the high cliff to the pond below. And, in the pond below, the water is blue-green, like a piece of emerald, due to limestone and stalactites around. You will totally fall in love with it. Just smell the sweet weather into your lungs. Taking several selfies is a good idea. But be careful not to fall into the water. 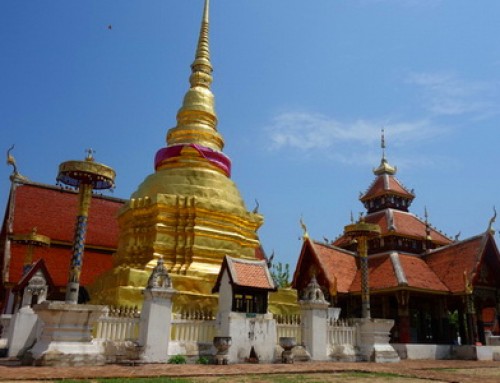 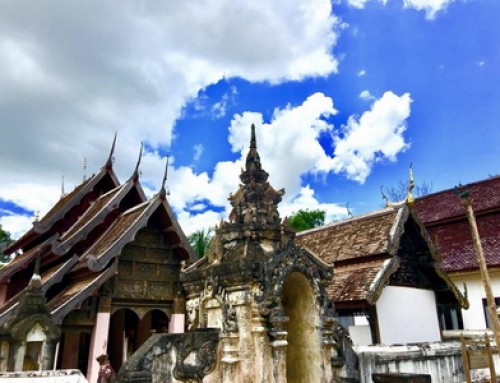 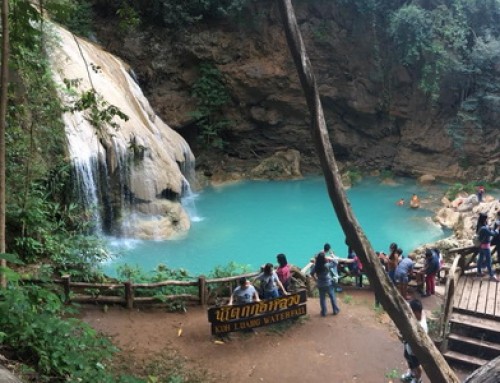 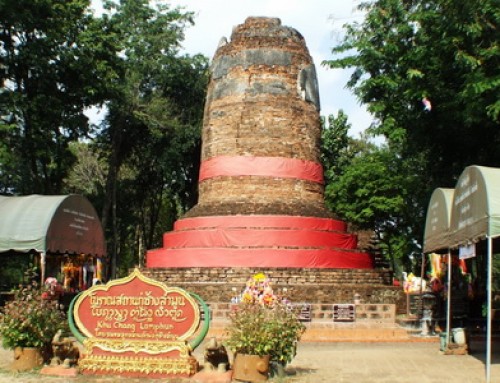