Phra That In Kwaen ‘A wonderful historical thing’ 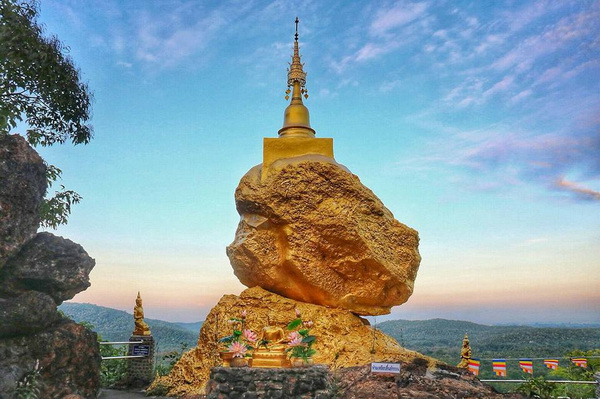 There are still many wonderful things in Lamphun, and this following one should not be disappear from the list. It’s a very stunning, valuable, and wonderful historic place.

Phra That In Kwaen is located on a mountain named ‘Doi Tham Hin’. The legend says, long time ago, villagers around there saw two rocks located on the cliff. It’s leaning so much that villagers though it could have fallen down. Therefore, they tried to push the rocks with sticks. It was useless, however. The rocks weren’t moved at all, although many people tried together at the same time.

Later, Kruba Chayawongsapattana assigned his followers to find the two rocks. Then, he built a small pagoda on the top one. That’s what you see nowadays.

The area is surrounded with great scenery. There are mountains around. The air is fresh. Beside, there are several golden statues around the rocks too. Not only that. There are footprints nearby, which are belived to be Lord Buddha’s footproints. See for yourself.

If you’re done with the rock site, you can just explore the woodland nearby. Don’t forget to get your camera ready. You won’t want to leave the beautiful site behind.

Just go along the Super Highway ‘Chiang Mai – Lampang’. Pass Pa Sak Junction, Lamphun Provincial Organisation, and PTT Gas Station. Soon you will see Nong Lom Intersection, where you should turn left and continue straight. Don’t worry about getting lost, as you will see the signs of Phra That In Kwaen all the way. Just try to follow those signsor you can book the private tour with us for 1 Day trip.

Phra That In Kwaen Map