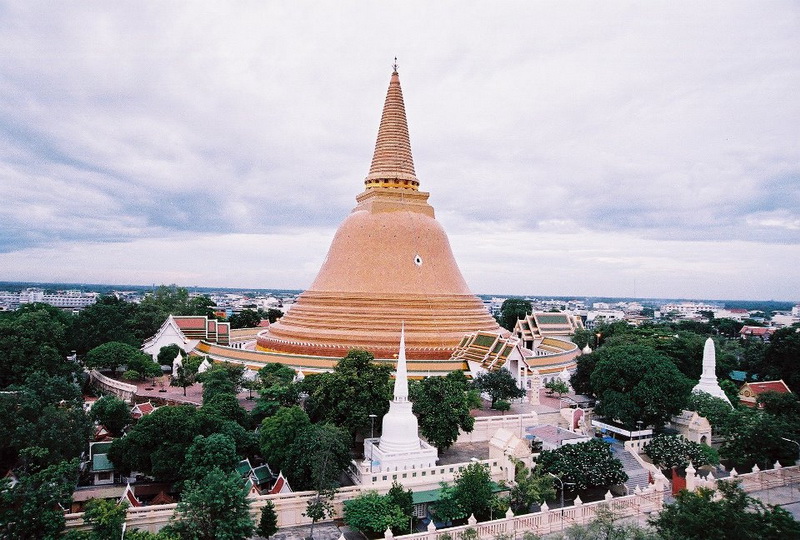 If you want to feast your eyes with a large, beautiful pagoda in a temple, then don’t avoid this choice. “Wat Phra Pathom Chedi”

Wat Phra Pathom Chedi is well-known for its super large and glorious pagoda. It is believed that the pagoda was probably built somewhere around the period of Ashoka the Great.

The legend says, at the time, the emperor was on his way of religion spread. His diplomats were believed to be sent and spread Buddhism at Nakhon Pathom for the very first time. Therefore, a large pagoda, which looks like the one in India, was built as the landmark. Years went by, King Rama lV was ordaining monkhood. His Majesty saw the pagoda and decided to cover it with a larger new pagoda, which is about 120 metres high. Unfortunately, His Majesty had passed away just before the work was done. Later, the pagoda was perfectly and completely decorated by King Rama V. However, when the period of King Rama VI came, His Majesty also did a little bit of decoration for the pagoda, making it more beautiful.

You will want to see the pagoda right away. The pagoda looks like a shape of a bell. Yes, it’s also covered in porcelain of orange-yellow color. There is also a small vihara below it. But the best part is, there are some parts of Lord Buddha’s relics inside the pagoda. For your happiness of mind and good fortune, you will want to pay respect to this, probably also make a simple wish. Most of Buddhists love to do so. In fact, the event of paying respect to the pagoda is held annually at the temple. If you’re lucky, you may get to the event right on time. Just try to follow the news on the internet.

Beside of the pagoda, there are many other important architectures at the temple, all of which are believed to be good for your fortune. Just walk around and see them for yourself. You should see various styles of art through your eyes.