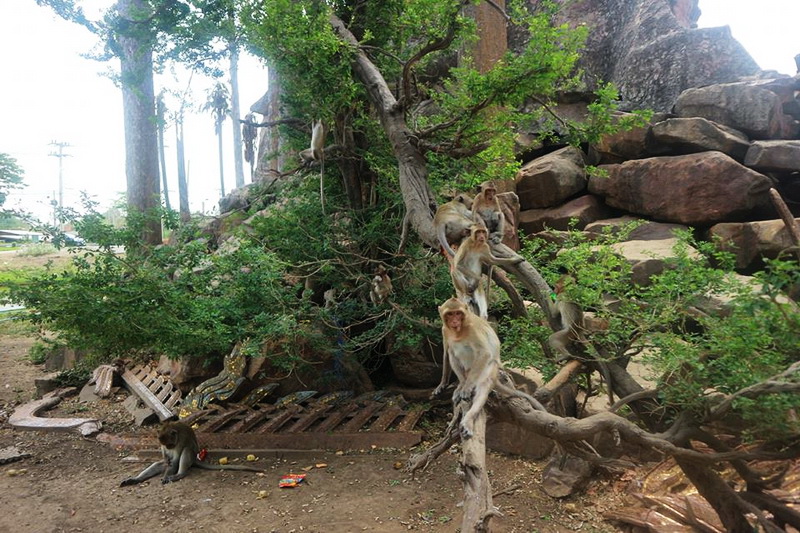 In Thailand, you may believe that there are lots of monkeys only in Lopburi. No, that isn’t it. In fact, if you want to play with those lovely little friends, you can visit Ayutthaya too. Even Ayutthaya is well-known for many historic temples and architectures, but there is a temple that contain a large group of monkeys. Wat Khai Mee Ling mean Wat = Temple, Khai = Chicken, Mee = Have, Ling = Monkey

From the name of the temple, you may be confused, ‘What’s in the temple? Chickens of monkeys?’. Well, here’s the truth.

The name tells you about chicken, but you will meet monkeys when you go there. Sounds strange, huh?

Anyway, these monkeys are really cute. You may just drive to the temple, walk around for sightseeing, take photos, make some merit, pay respect to some architectures, then you can play with the monkeys before you leave. There are everywhere. They’re small and active. They may be on grass, trees, or anything else. Be nice to them. Don’t tease or bully them, as they will be hurt and scared. You can feed them. Just pass your food to their hands. Don’t be afraid. They’re cute. But don’t touch them too much, as some monkeys may  be mischievous and play with you in a harsh way.

Wat Khai Mee Ling is located in Han Sang District, which is only about 25 kilometres away from the heart of Ayutthaya.