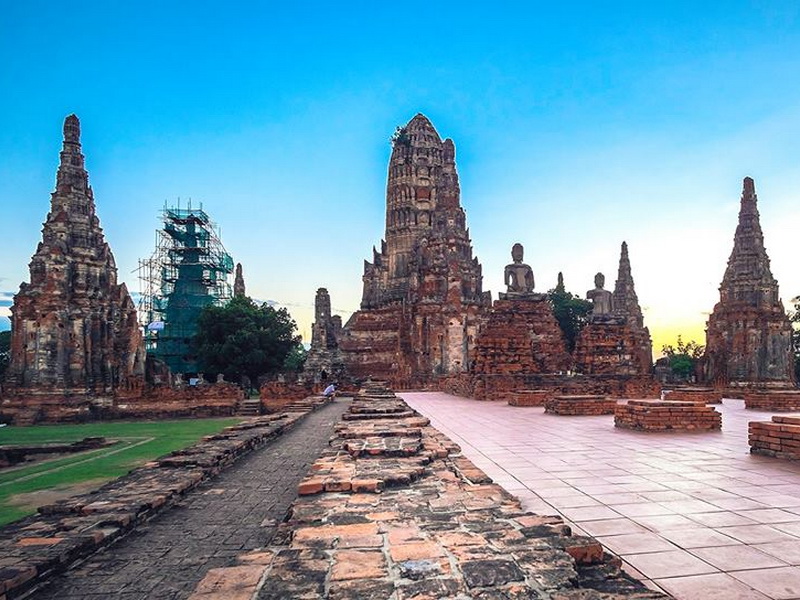 Ayutthaya Historical Park comprises of the ruins of temples and palaces of the capital of the ancient Ayutthaya Kingdom. The park is located on an island surrounded by three rivers where the old capital used to be.

To learn history, you don’t have to stick to books only. In fact, it will be better if you have a real experience, going out and see real places of what appear in books you’ve read.

Ayutthaya Historical Park is a place that can give you a real learning experience, as you will see some important historic architectures.

The park was considered as a world heritage in the year 1991. Through all these years, it has been renovated several times. But its ancient appearance has never gone anywhere. You can still see it as rugged stone architectures.

There are over 400 ancient architectures within the area of the park, for examples… 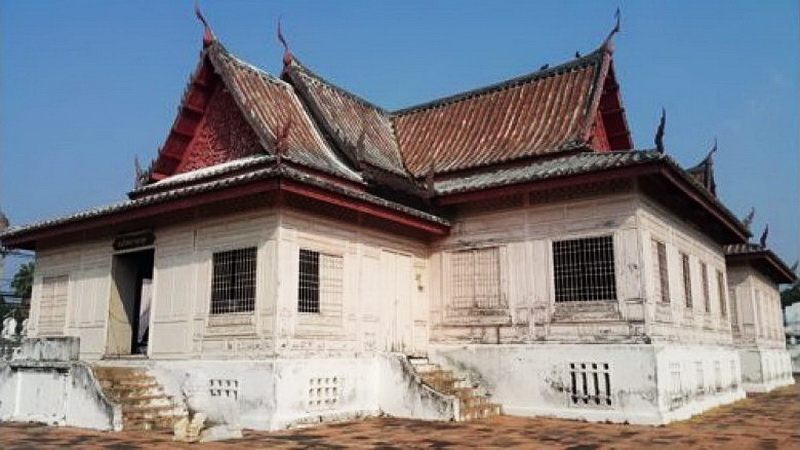 The Grand Palace : This one is located near Lopburi River. It’s beautiful, but, unfortunately, it was burnt down centuries ago due to a clash. Therefore, you should only see it as a broken, burnt, rugged, old stone palace. The grand palace or Chandra Kasem Palace or Wang Na, also known as the Front Palace was built in 1577 as the Royal residence for the crown prince. The palace consists of a group of buildings, some in traditional Thai style and some in European style. In the 17th century an observatory tower was built to observe the stars. Today, the palace is a museum with permanent exhibits on the history of the Ayutthaya Kingdom and personal artifacts of King Rama IV, who commissioned the construction of the new palace buildings. 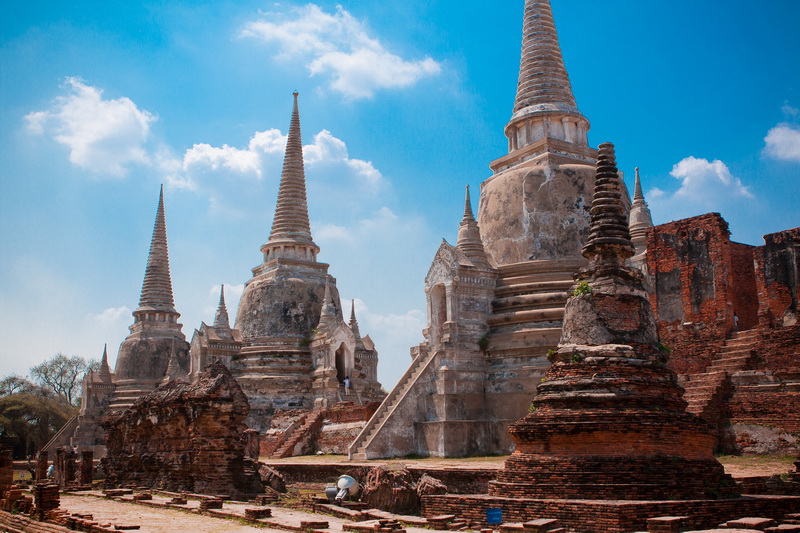 Wat Phra Sri Sanpetch is situated on the city island in Ayutthaya’s World Heritage park in Pratu Chai Sub-district. It has been registered as a national historic site by the Fine Arts Department since 5 March 1935. This monastery was the most important temple of Ayutthaya and situated within the Grand Palace grounds. It served as a model for the Temple of the Emerald Buddha in Bangkok. 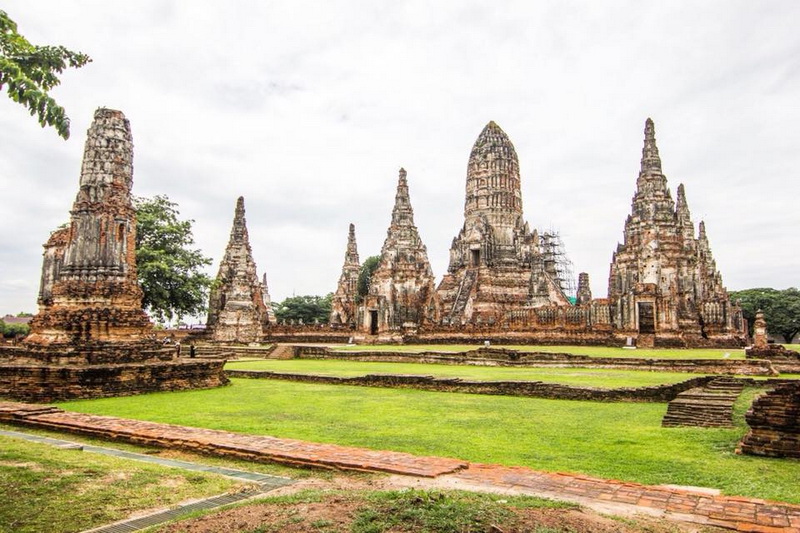 Wat Ratchaburana was built in the year 1421 by King Borommarachathirat. It also called the Monastery of the Royal Repairs or the
Ayutthaya at Tha Wasukri Sub-district.  Its design resembles the early mountain temples of Angkor. The monastery faces East, the direction of the rising sun. Wat Racha Burana was initially built as a basic quincunx surrounded by a covered gallery. At a later stage the monastic structure was expanded with a vihara and ubosot in an east-west axis. The vihara became partly incorporated into the gallery, while the ordination hall stood isolated on the western side. The monastery was surrounded by water, a symbolic representation of the oceans surrounding Mount Meru. The complex faced Khlong Pratu Khao Pluak to its east and another Lopburi oxbow shortcut canal to the west.

Wat Mahathat or the Monastery of the Great Relic is located on the city island in the central part of Ayutthaya in Tha Wasukri sub-district. The temple is situated on the corner of the present Chikun Road and Naresuan Road. The monastery stood on the west bank of Khlong Pratu Khao Pluak, an important canal, which has been filled up somewhere in the early 20th century. In ancient times the temple was likely fully surrounded by canals and moats. One of the temple’s most photographed objects is the head of a stone Buddha image entwined in the roots of a tree. 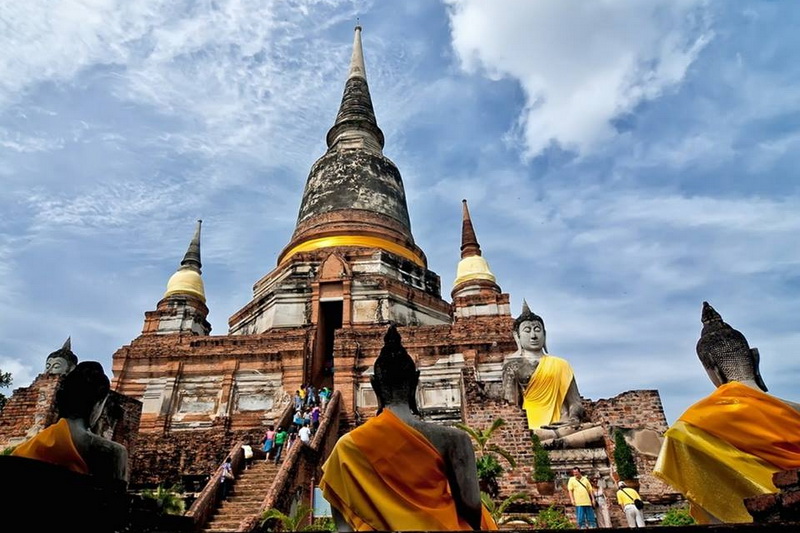 Wat Yai Chai Mongkhon : “the Monastery of Auspicious Victory” is located East of the historical island. Highlight of the monastery is its very large imposing prang dominating the area. Wat Yai Chai Mongkhon is still an active temple; monks live in kuti on the grounds. The temple’s main structures being the principal chedi, the principal viharn and the ubosot are lined up on an East West axis. Surrounding them stand a number of subsidiary chedis in various styles and state of repair and the kuti, the monks living quarters. In the North East corner are the remains of a viharn enshrining a very large Reclining Buddha image.

The atmosphere around Ayutthaya Historical Park is simply quiet, peaceful, and natural. The place is surrounded with ancient architectures, grass, and clear sky. Don’t forget to take a camera with you too. It will make your learning better. Read something about those architectures before you get there. Then you get there and take a lot of pictures, relax yourself by walking around. 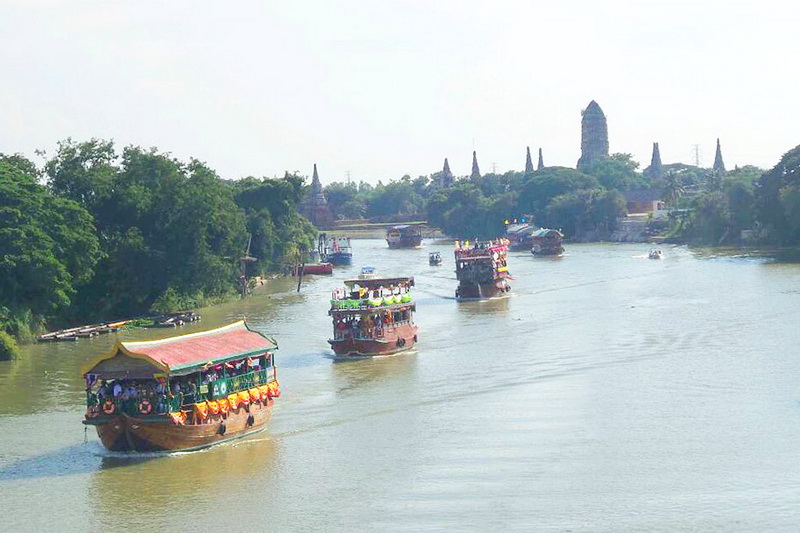 A private boat trip around the historical island provides for the most relaxing way to see some of Ayutthaya’s most famous temples. Enjoying the river breeze you will also have a chance to observe the daily life of local people around the river and see more recent, active Buddhist temples. Along the way you will have great photo opportunities from the rivers surrounding the historical town.

The boat trip around the island takes about one hour without stops. With stops at Wat Phanan Choeng and Wat Chaiwatthanaram, two temples that have boat landings, the trip takes about two hours. (entry fees for temples not included)

The park is in the heart of Ayutthaya historical park. To get there, it’s not gonna be difficult. Just drive along the Highway No.1, until you find your way to switch to the route No.32 and 309. That should get you to Ayutthaya. Then you may just continue by using Google Map.